We have some exciting in person events for Fall 2022 for our NFCSS & Local Cultural members: 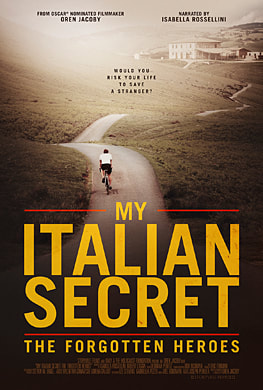 MY ITALIAN SECRET tells the story of brave Italians, including Gino Bartali - the famous cycling champion, who defied the Nazis and Fascists to hide, rescue and protect thousands of innocent Jewish people and others in Italy during the Holocaust. The film, which will be in theaters in March 2015, is narrated by Isabella Rossellini with Robert Loggia as the voice of Gino Bartali. Executive Producer will be in attendance to answer questions and talk about the journey to bring this story to light.

MY ITALIAN SECRET tells the personal accounts that reflect this little known piece of history. Through these witnesses' stories, viewers revisit a time when an entire continent was engulfed in genocide. They will learn how approximately 80% of Jewish people living in Italy, including foreign Jews, survived the Holocaust. On September 8, 1943 the Nazi's invaded Northern Italy and the deportation of thousands of Jewish people and others to Auschwitz began. This film asks: Why would someone risk his or her own life and put their family in jeopardy to ‘do the right thing’ and protect the life of another person... a stranger?

MY ITALIAN SECRET personifies the actions of individual Italians -- from everyday citizens to clergy and government officials and famous people such as Gino Bartali -- who rescued thousands of Jews from deportation and death, hiding and protecting them, despite risks to their own lives and those of their families. 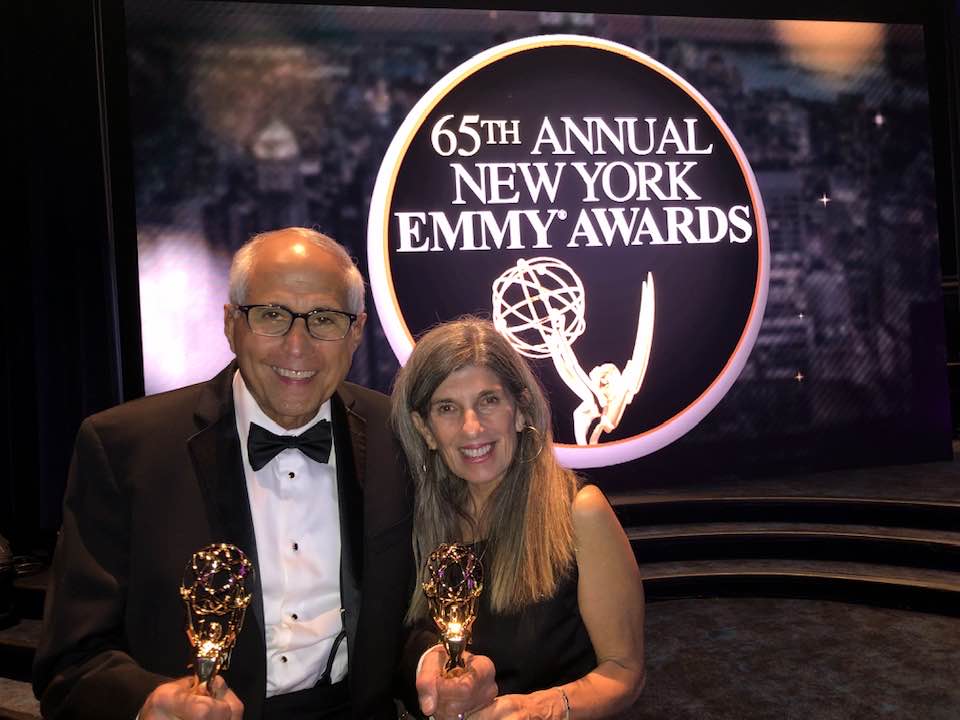 The Buffalo Story: History Happens Here won the New York Emmy for Community Service was awarded because of a unique partnership that is providing the work of local broadcast journalists to Buffalo teachers and students. Our thanks to WIVB-TV, The Niagara Frontier Council for the Social Studies, The Western New York Library Resouces Council, and the Buffalo and Erie County Public Library for supporting our efforts to stimulate young minds with real footage relating to our region’s storied history. The community needs to support the efforts of the Buffalo Broadcasters Association whose cornerstone mission is to digitize important archival footage from Western New York’s major broadcast outlets.
Niagara County Historical Society Grade 4 Unit 6 Lessons
The History Center of Niagara is one of 13 non-profit entities that's getting a 2021 "Impact" grant from the Erie Canalway National Heritage Corridor. The county historical society was awarded $4,180 to develop and implement six virtual lesson plans highlighting the history, geography and engineering of the Flight of Five canal locks and the Erie Canal's impact on the local, state and national economy, as well as innovations in transportation and communication.

The lessons are targeted to fourth grade students, who study the canal and local history at that grade level. They're based on the Inquiry Design Model using New York State Learning Standards for fourth-grade local history and government. Brief, supplemental videos are included to expand on certain themes and introduce students to the canal, the Flight of Five locks, Erie Canal Discovery Center, the History Center and other local historic sites.
Hello NFCSS K-12 Educators,

D’Youville University has the dates for their asynchronous webinar series. Their first session will begin Monday January 10th to February 14th. They anticipate 3 others in case some teachers are not able to join in January. Materials would be posted on each Monday for 5 weeks. If teachers are interested, they can email them at dcwny@dyc.edu. Their office hours are flexible, and they should be able to work with the teacher’s schedules. Attached is a flyer with the session dates.

Data Citizens Western New York (DCWNY) would like YOU to join our asynchronous webinar series designed to support Title I K-12 social studies teachers in Western New York. During our series, you will explore global historical questions using geo-spatial data. You will also learn how to analyze and address local civic issues to foster teacher led civic engagement projects. We will host 5 weekly asynchronous sessions on the integration of Geographic Information System (GIS) into social studies instruction. We would provide a $500 compensation stipend along with 15 CTLE hours through the NFCSS.

If interested, check out our resources on our website: Data Citizens Grant | D'Youville | DCWNY (dyouville.edu).
If you have any questions, please reach out to dcwny@dyc.edu. 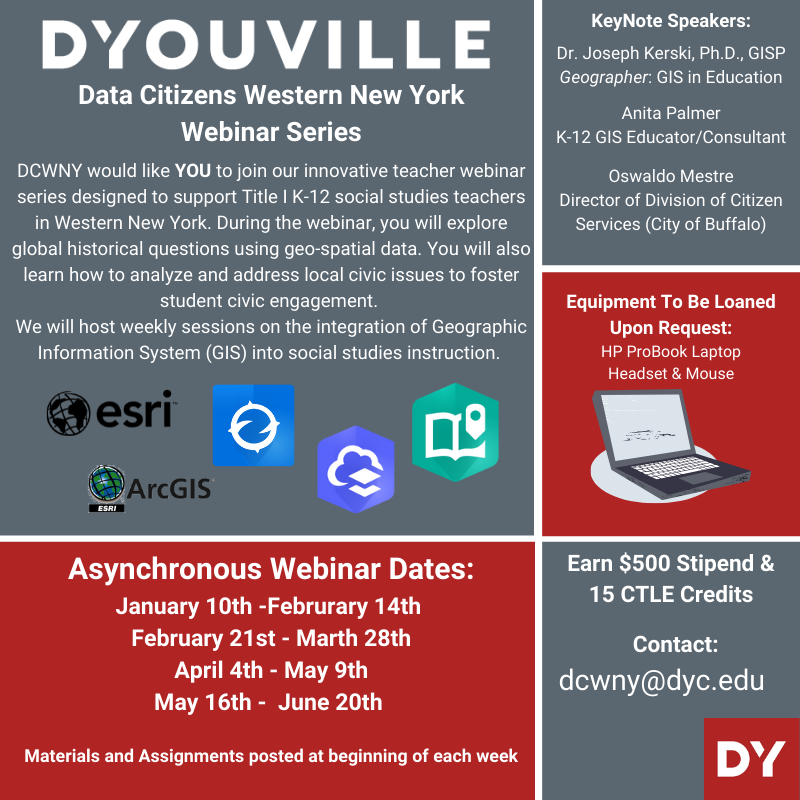 The Gilder Lehrman Institute of American History offers rigorous Teacher Seminars for K–12 educators. Held at colleges and historic sites across the US and abroad, the weeklong workshops include daily programs with leading American historians, visits to local historic sites, and hands-on work with primary sources.

These highly competitive seminars are open exclusively to participants in the Institute’s free Affiliate School Program. Check here to see if your school is in the Affiliate School Program. If it is not, register now to ensure that you will be eligible to apply for the Teacher Seminars. We welcome applications from previous Teacher Seminar attendees as well as new participants.

The Buffalo History Museum Presents
The Buffalo News and M&T Bank present Icons: The Makers and Moments of Buffalo Sports.  Icons explores our rich sports history and investigate the unique connection between fans and our beloved teams and sports idols. Icons is located in newly refurbished gallery space and on The Buffalo History Museum’s second level, adjacent to Inside Tim Russert’s Office.

This engaging, multimedia exhibit features stories and artifacts spanning more than a century. Guests of the Museum will enjoy a series of one-of-a-kind interactive experiences- including a Buffalo sports trivia game, voting for top ten favorite moments with incorporated film clips, a test of coaching prowess in an engaging interactive, “You Call the Play” mimicking game broadcasters and featuring game footage.

Guests are invited to explore the origins of professional sports in Buffalo, relive the most unforgettable moments, and remember the teams and people that inspired us all. Featured sections – determined by members of the community- will highlight Buffalo’s top ten iconic sports moments, greatest teams, and sports figures.
We feel you will love Icons, a one-of-a-kind history exhibit.

The Buffalo Presidential Center
The Buffalo Presidential Center is an all-volunteer 501c3 non-profit organization chartered by the State of New York to explore and share stories about Buffalo and Western New York’s historic and contemporary contributions to the U.S. Presidency and national affairs. For over a decade the BPC has presented more than 12 public programs a year including speakers’ series, panel discussions, historical reenactments and exhibitions to audiences throughout Western New York.

The Buffalo Presidential Center is an all-volunteer 501c3 non-profit organization chartered by the State of New York to explore and share stories about Buffalo and Western New York’s historic and contemporary contributions to the U.S. Presidency and national affairs. For over a decade the BPC has presented more than 12 public programs a year including speakers’ series, panel discussions, historical reenactments and exhibitions to audiences throughout Western New York.

Buffalo's Presidential Center is open Saturdays from 10 am - 4 pm and is located in the Downtown Central Library on the 2nd Floor. 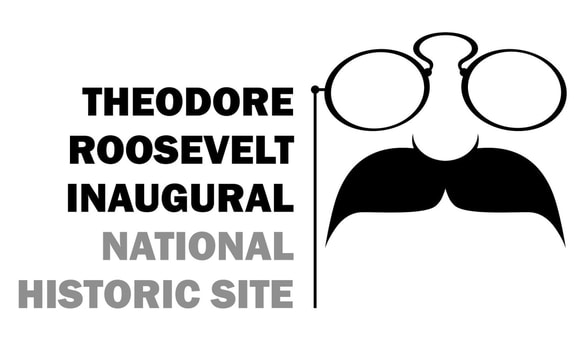 EXTENDED EVENING HOURS AND GREAT NEW PROGRAMS ON TUESDAY NITES @ THE TR SITE. We're very pleased to announce that beginning in Spring 2015, the TR Site will launch a slate of new programming as well as extended evening hours on Tuesdays.  “Tuesday Nite @ the Site” will feature a series of programs designed to appeal to a wide range of interests and ages. Keeping the museum open until 8pm on Tuesdays will make the TR Site more accessible for those individuals and families who may not be able to visit during traditional operating hours.

Tuesday Nite @ the Site” programs are open to all visitors, who can participate in them through the regular cost of admission to the TR Site. As a benefit of membership in the TR Site, members can take part in the programs at either no charge, or in the case of Trivia Nite, for half ($5) of the general admission price ($10).

The Programming Includes:
Sketch Nite – 1st Tuesdays / 5:00-7:30pm (February – November)
“Sketch Nite encourages visitors to slow down and really notice the details…”  During this informal evening, accomplished illustrators, casual hobbyists and budding artists are invited to sketch objects and architectural elements in the restored rooms of the historic house museum

TRivia Nite – 3rd Tuesdays / 6:30pm (February – November)
Do you enjoy brain-tickling entertainment, combined with a healthy dose of friendly competition?  Then you won’t want to miss TRivia Nite @ the TR Site!  Participants have the chance to test their knowledge on a variety of subjects, including: Theodore & the other Roosevelts (of course!); the National Park Service (in honor of its centennial in 2016); presidential history; as well as pop culture and current events.
Thanks to our co-sponsor -- the Pan-American Grill & Brewery -- for providing fabulous prizes for the top three teams!
Speaker Nite – 4th Tuesdays / 6:00pm (January – October)
In addition to topics relating to Theodore Roosevelt’s 1901 inauguration in Buffalo and the presidency, speakers in this series consider issues that were important during TR’s lifetime and continue to be relevant today. ​​​ 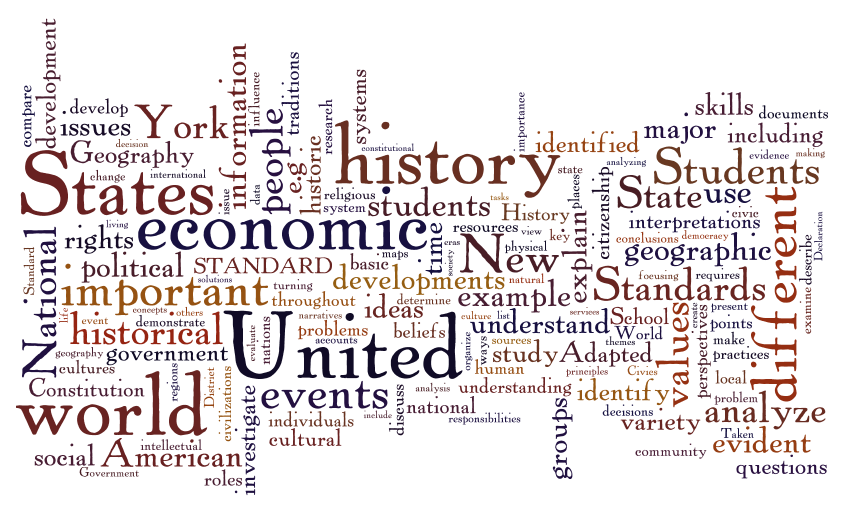